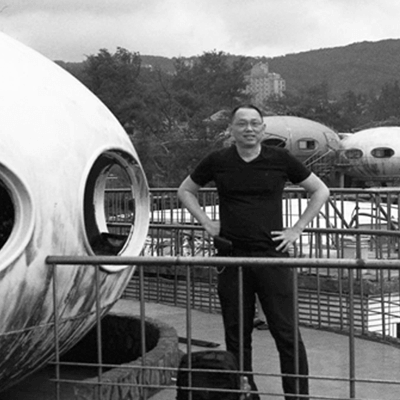 Born in Taipei, Taiwan in 1969. Graduated from the Taipei National University of the Arts, and specializes in photography, video, installation and painting. His early works featured a humorous approach that subverts the authoritarian regime during the Cold War, and revolved around the issues concerning place, history, national identity, and Taiwan’s subjectivity. He has invested long-term effort in taking pictures of ruins around Taiwan since 1990. In 2010, he embarked upon the survey project on disused public property in Taiwan, which not only unmasked the society of the spectacle arising from the assorted ideological black holes on this island under globalization, but also heightened the social awareness of this problem and accelerated the governmental policy reform in this regard. Recently, the artist has appropriated Chinese artistic masterpieces and recreated them in his own way as his autobiographical narratives, seeking to usurp the orthodoxy with his strategy of “pseudo-landscapes.” He has partaken on behalf of Taiwan in many prestigious events, including Venice Biennale (1997), Yokohama Triennale (2005), Asia Pacific Triennial of Contemporary Art (2009), Shanghai Biennale (2012), Beijing Photo Biennial (2013), Shenzhen Sculpture Biennale (2014), Venice Biennale of Architecture (2014), Seoul International Media Art Biennale (2014), Asia Triennial Manchester. (2014), Asian Art Biennial (2015), Biennale of Sydney (2016), Curitiba Biennial (2019), Krasnoyarsk Biennial (2019), and Taipei Biennial (2020). His recent noteworthy solo exhibitions include The Space that Remains: Yao Jui-Chung Ruins Series (Venice Biennale of Architecture, 2014), Incarnation (TKG+, 2017), and Republic of Cynic (C-LAB, 2020).