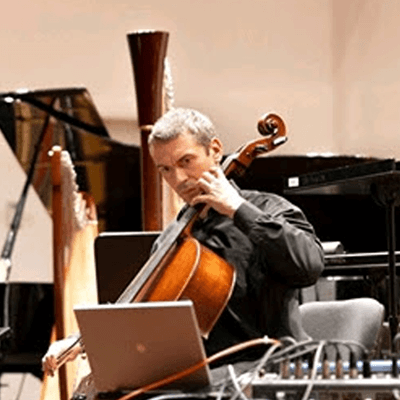 In 2003 he graduated from the Academy Music for them. I. J. Paderewski in Poznań, in the cello class of Dr. Eugeniusz Zboralski. He actively participates in many concerts, competitions, courses, festivals, radio and television broadcasts, as a soloist, chamber musician and orchestral musician, both at home and abroad. Activity as an instrumentalist musician is closely related to the profession of sound engineer.
In 2000 he graduated from the Wielkopolska School of Radio, Film and Television – specialization in production sound, and in 2007 postgraduate studies in computer science at the Poznań University of Technology. From 2000 He runs a recording studio, specializing in recordings of classical music and recordings and realization of contemporary music. Producer and producer (artfonia.pl) He supplements his activity with teaching work.
Since 2001, he has been working continuously in schools music in Greater Poland. His students actively participate in musical life of their schools, win prizes at competitions, festivals and workshops. Lots of alumni continues his studies in music. For five years he has been working at the Academy of Music. I. J. Paderewski in Poznań at the Faculty Composition, Conducting, Music Theory and Rhythmics, specialization Electroacoustic Composition, where he teaches subjects such as electronic music, computer music, acoustics practical.