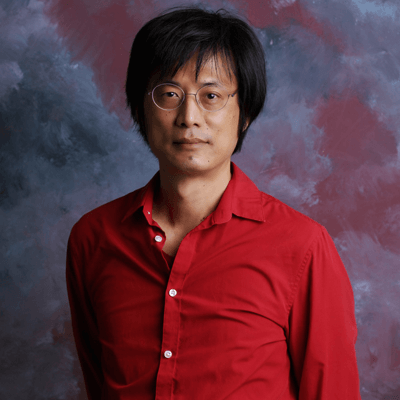 Tao Ya-Lun (b.1966) was born in Taipei, Taiwan. He received his BFA from the Department of Fine Arts, National Normal University, and his MFA from the Institute of Plastic Art, Tainan National University of the Arts. He is currently a professor at the College of Communication, National Chengchi University. Tao is a new media art pioneer in Taiwan, whose creative practice has begun with image installation, sound installation, mechanical installation and light art, and has recently moved on to time-based art in the form of AR and VR. He mostly draws his inspiration and topics from technological trends in this digital era, which reflect how human beings use technology as a means of physical extension and discuss bodily perception, the working of consciousness and the interaction between virtuality and reality.
Tao is the recipient of the New Media Art Installation Award in the 2018 Contemporary Audio-Visual and New Media Arts Festival (MADATAC) in Madrid, Spain. He was also the grant recipient of the Taiwan Fellowship Program launched by Asian Cultural Council, which he visited the United States as an exchange scholar. He has been invited to be the artist-in-residency by the Headlands Center for the Arts in San Francisco, and was sponsored by the Hong Kong Arts Development Council to be the first artist-in-residency at 1a space. He has also done an artist residency at the Nordic Institute for Contemporary Art that is prestigious for both digital images and technology arts. Tao has been honored by various awards, among which are the first prize of the scholarship program of the Cité Internationale des Arts, Paris; the outstanding alumnus of Tainan National University of the Arts; the Taipei Prize and Taipei County Prize, which are the most iconic prizes in Taiwan’s contemporary art scene; and the Li Chun-Shen Contemporary Painting Award that represents the spirit of the Asian contemporary art world, for which he was the youngest recipient of all time

In the Book of Genesis in the Christian Old Testament, the man-made Tower of Babel represented humankind’s desire to reach heaven. The ambitious action was stopped by God, who divided humankind by making them speak different tongues. Without communication, the plan to build the tower soon failed and humankind became dispersed in the world unable to build the road to heaven ever again. In modern linguistic context, the Tower of Babel also refers to “utopian fantasies.” “Utopia,” etymologically speaking, refers to “no-place” and “a good place,” paradoxically implying that the good place is nowhere to be found.

The artist posits the utopian concept between the real and the virtual, hinting that the “interior” of this massive museum is built on a found ruin. Therefore, in the virtual reality, he constructs the ancient Tower of Babel with stone, giving it a historical appearance, whereas the interior is rendered high but empty, with scaffolding to convey the ruinous imagery. The collapsing Tower of Babel ends with the chaotic loss of a unified language—a metaphor for contemporary humanities and culture. It reminds people of major 21stcentury events, such as the September 11 attacks and all other actions done in the name of “justice,” which serve as the modern examples of the fallen Tower of Babel. Social development and progress is based on human concepts. History itself has no end and constantly repeats like a feedback loop. When the contemporary Tower of Babel collapses, it becomes a reminder for humankind to think about what “utopia once again” really means.