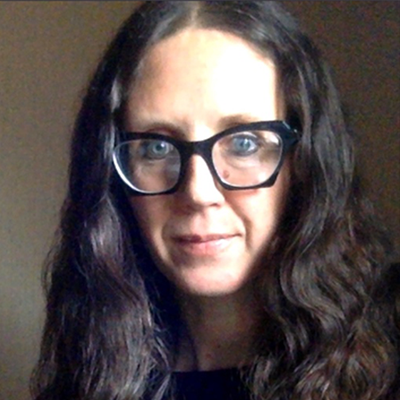 Sandrine Deumier is an artist from France working in the field of performance, poetry and video art. With her training in art from DNAP National Institute of Fine Arts, France and in philosophy from Toulouse II University, France, she has constructed a multifaceted poetic style focused on the issue of technological change and the performative place of poetry conceived through new technologies. Through working at the junction of video and sound poetry, she considers them as mediums to express the form of unconscious material itself. For several years, she has tried to develop poetic experiments mainly through multimedia devices (digital narrative performances, video poems, sound poetry, participatory poetry). Her work has gradually moved towards the development of digital animations in virtual reality devices and 360-degree immersion projects for dome and planetarium. Her works have garnered many positive responses, including the 2022 Expanded Media Award in the Category Network Culture (Stuttgarter Filmwinter, Germany) and the 2021 Festival Platform Award (Dome Theater Category) Japan Media Arts Festival. Once Residency in Planétarium de la Cité des sciences et de l’industrie Residency (Paris, France, 2020) and Centre de Production DAÏMÔN (Gatineau, Canada, 2016). Selected in exchange grant and residency in Hangar-Casa de Velázquez (Barcelona, Spain, 2019).

Realness – Cloud and Dust is a visual immersion in a cybernetic garden in search of possible identifications with a mutant nature. By focusing on forms of human-machine hybridizations, inter-species mutations and becoming-plant, this project proposes the vision of an entirely fictional world where future forms of humanities would have been artificially reconnected to their natural environment.

This project attempts to develop an imagination centered on a symbiosis between human beings and a rediscovered state of nature. Rediscovered through other predispositions to see, hear and be touched by what surrounds us, by what prolongs us, by what we are linked to and by what connects us to the whole – namely the living world.

Realness – Cloud and Dust tells a story of relationships and interconnections between living beings.

The alteration or modification of our state of humanity, in a fictional way, could perhaps make possible processes of identification with related forms of identities. Dis-appropriate of our own identity in order to be ready to be appropriated by other forms of life. Be permeable, tame, subject to modification and willing to singular states of attention to become aware of the world as a living entity crossed and inhabited by networks of relationships – while being self-inhabited by other forms of consciousness and crossed by other modes of perceiving and feeling. Understand that to be alive is to be together. And learn how to make a world-with the living.

Realness – Cloud and Dust tells the story of how to be emotionally parasitized by other forms of life and to be regenerated from them.