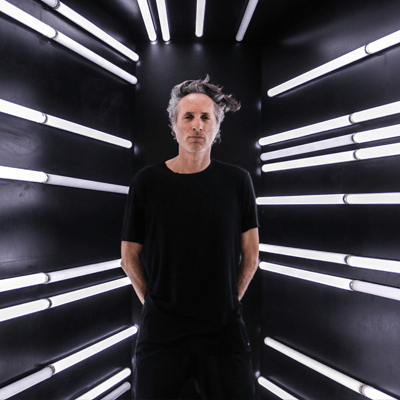 Ran Slavin’s WORLD5 show and video installation is composed of several video, sound, and light installations. Together, they present a split image that transpires intensively and cyclically in several places simultaneously. The museum’s large gallery, whose unique ceiling windows allow daylight to penetrate, has been sealed and darkened by the artist. Within the gallery there is endless flickering artificial light originating in split screens, red LED light lines, flicker lights and fog dispersion.

Slavin uses his unique artistic language to contemplate the meaning of our disconnection from natural time, presenting technological space and time as an all-encompassing reflection of the virtual and digital age. The installation title resonates with the common classification of countries into First, Second, and Third World countries by parameters such as regime, economy and technological progress – as well as familiar forms of Science-Fiction world names.

World5 is a virtual world whose place is indefinite and whose time is beyond the natural order. It is no longer contingent on the given rotation of the sun and earth, by which 24 hours per day are determined as well as hours of light and darkness, of activity and rest. World5 is a world without breaks, a 24/7 world, as Jonathan Crary titled his book, 24/7: Late Capitalism and the Ends of Sleep (2013). Crary maintains that contemporary capitalism requires us to be alert, readily available to anyone at any time – on the cell phone, mail, or Skype – and ever-ready to serve uniform, global, corporate business.

The exhibition presents a fragmentary, simultaneous image of this world through the four films on view in the large gallery, each of which is split into multiple strips, and an additional installation, Kiosk, on view in another room in the museum.

Watching this flickering space is like wandering around a galactic planetarium or like surveillance of some unknown target from a Control Room. The 3-D images created by the artist are anchored in Sci-Fi landscapes and the aesthetics of virtual games and digital web platforms, which have been processed using multi-layer picture editing techniques and post-production special effects software.

The viewer travels with the camera through an exterritorial cyber space governed by mechanical bodies and old objects combined with symbolic and digital signs. Together, they produce a cosmological fascination charged with dark mystery and informed by enticement and danger, beauty and alienation. This world straddles the gamut from fullness to emptiness, from meditative stillness to intensity, from utopia to dystopia.