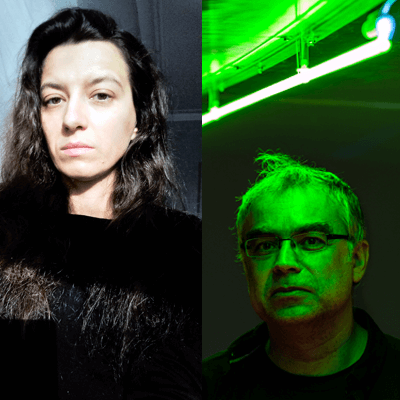 “Medialogue” – an collaboration project of visual artist Pavel Korbička and composer and improvisation artist Lucie Vítková (based in New York). The architecture of the audiovisual dialogue makes the Skype communication network. The dialogue of artists – Vítková´s sound with Korbička´s light – was deconstructed in the online transmission. This deconstruction changes according to the quality of connection, speed and number of other users. “Medialogue” is an audiovisual online space that tries to uncover primary principles of articulate speech.

Pavel Korbička (*1972) is a Czech sculptor and visual artist, living in Brno. He studied at Academy of Fine Arts in Prague (1993 – 1998; Studio of Sculpture – Space – Instalation of Prof. Stanislav Kolíbal and Studio of Conceptual Trends of Prof. Miloš Šejn). In 1995 he represented the Czech Republic at “Projects for Young Artist – Germination IX” in Delphi (GR). Since 1998 he has been teaching at the Faculty of Fine Arts of the Brno University of Technology (Studio of Sculpture No.2), where he was appointed associate professor in 2012. In 2006 he participated in the International Sculpture Symposium “Stahl Schwerin” ( DE) and in 2011 he participated in the “Skyway Festival” in Torun (PL). In 2019 he worked at SCOPE Light Art Residency in Berlin (DE). In 2020, he received an annual creative scholarship from Pollock – Krasner Fountation in New York (USA). He has been exhibiting since 1993, independently since 1998. He has realized authorial exhibitions such as etc.: Deflection (2019) in The Brno House of Arts (CZ); The Space of the Body (2017) in Via Art Gallery in Prague (CZ); Space in the Space (2017) in LAB 303 – Intermediate Experimental Gallery in Katowice (PL); or The Event of Space (2014) Kunsthalle Košice (SK). He has participated in group exhibitions such as etc.: Toyama Glass Exhibition (2021) in the Toyama Glass Art Museum (JP); The Venice Glass Week (2020) in Venice (IT); Pavillion 02 (2019) in GAD – Giudecca Art District in Venice (IT); NordArt (2018) in Büdelsdorf (DE); Glass as Art (2018) in Portheimka Glass Museum in Prague (CZ); or Labirinti di energia in Spazio Tadini Gallery in Milano (IT). Permanent Installations in public space: etc. The Structuring of Space (2019) in SCOPE BLN building in Berlin (DE); The Helix (2018) in staircase of Portheimka summer house in Prague (CZ); False Angle (2008) in staircase hall of the House of the Lords of Kunštát in Brno (CZ); or Phase of the Sphere in the International Sculpture Park in Wiligrad (DE).

Lucie Vítková (*1985) is a composer, improviser and performer (accordion, hichiriki, synthesizer, voice and tap dance) from the Czech Republic, living in New York. During her studies of composition at Janáček Academy of Music and Performing Arts in Brno (CZ), she has been a visiting scholar at Royal Conservatory in The Hague (NL), California Institute of the Arts in Valencia (USA), Universität der Künste in Berlin (D), Columbia University in New York (USA) and at the New York University. Her compositions focus on sonification (compositions based on abstract models derived from physical objects), while in her improvisation practice she explores characteristics of discrete spaces through the interaction between sound and movement. In her recent work, she is interested in the social-political aspects of music in relation to everyday life and in reusing trash to build sonic costumes. She has been nominated for 2017 Herb Alpert Awards in Arts in the category of Music, was commissioned by the Roulette Intermedium in 2017 and has become a Roulette resident artist in 2018. She has put together two ensembles – NYC Constellation Ensemble (focused on music behavior) and OPERA Ensemble (for singing instrumentalists). During the 2017 Mentor/Protégé Residency in Tokyo (JP), she studied hichiriki with Hitomi Nakamura and has been a member of the Columbia University Gagaku Ensemble. As an accordion player, she collaborated with New York based TAK Ensemble, S.E.M. ensemble, String Noise, Du.0, Argento Ensemble, CU Raaga, Ghost Ensemble and Wet Ink. Vítková has also been active in the visual art scene and worked on projects with Pavel Korbička, Jolana Havelková, Dalibor Chatrný and Morgan O’Hara.