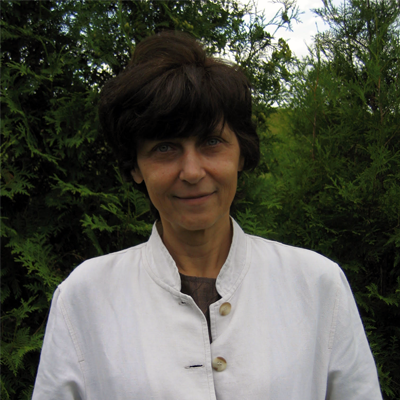 Lidia Zielińska (*1953) is a Polish composer. She studied composition at the State Higher School of Music in Poznan. She participated in numerous courses in composition and electronic music in Poland and abroad (“Musicultura” in Breukelen, Max Deutsch Symphonic Workshop in Paris, courses organized by IRCAM in Krakow and by the Polish Section of the ISCM in Rydzyna and Wzdow). She also played the violin in the Poznan Philharmonic Orchestra and the Agnieszka Duczmal’s Amadeus Chamber Orchestra of Polish Radio.

She has received commissions from the Polish Radio, Solidarity Union, Eighth Day Theatre, Holland Dance Festival, Euro-Musik-Theater in Stuttgart, De Ereprijs ensemble, Radio Sweden, Warsaw Autumn Festival and the Ministry of Culture of Baden-Württemberg, Donaueschinger Musiktage and SWR2. She worked as guest composer in the PWSM electronic music studio in Cracow, the Experimental Studio of Polish Radio in Warsaw, the IPEM/BRT in Ghent, the EMS in Stockholm, the ZKM Zentrum für Kunst und Medientechnologie in Karlsruhe, and at the Experimentalstudio des SWR in Freiburg.

Lidia Zielinska is a professor of composition and the director of the Electroacoustic Music Studio at the Music Academy in Poznan. She also runs the sound reception workshop at the Academy of Fine Arts in Poznan.

She is a juror, curator, expert and consultant of various musical, intermedial and educational activities in different European countries, including Eastern Europe, and The European Union units.

She has extensively written and lectured on contemporary Polish music, electroacoustic music, the history of experimental music, sound ecology and traditional Japanese music at various universities in Europe, Asia, South America, Australia, New Zealand, Manggha Centre of Japanese Art and Technology in Cracov, Centre for Contemporary Art in Warsaw, World Forum for Acoustic Ecology in Stockholm and Peterborough, as well as numerous academic sessions in Poland and abroad. She has taught and given summer courses, seminars and workshops in Poland, Belarus, Canada, Chile, Croatia, France, Germany, Holland, Japan, Moldova, Sweden and Switzerland.

She is a vice-president of the PSeME – Polish Society for Electroacoustic Music and was a vice-president of the Polish Composers’ Union (-2013). She has served on the Repertoire Committee of the Warsaw Autumn Festival (1989–92 and 1996–2005), and as artistic director of the ‚Poznan Musical Spring’ Contemporary Music Festival in Poznań (1989–92) as well as the ‚Child and Sound’ International Festival in Poznań. She was also a member of the Programme Committee (1990-92) of the ISCM World Music Days in Warsaw and the Polish–German Radio_Copernicus (2004-06).

After the political change of 1989 Zielinska was a co-founder of the BREVIS Music Publishers (a first private music publishing house in post-communist countries), the ‘Child and Sound’ Foundation,  the Artistic Atelier ‘Dom rytmow swiata’, the music quarterly ‘Monochord’, the Friends of “Warsaw Autumn” Foundation, the Society for the Encouragement of the Fine Arts, the PSeME – Polish Society for Electroacoustic Music (national section of CIME/ISEM).