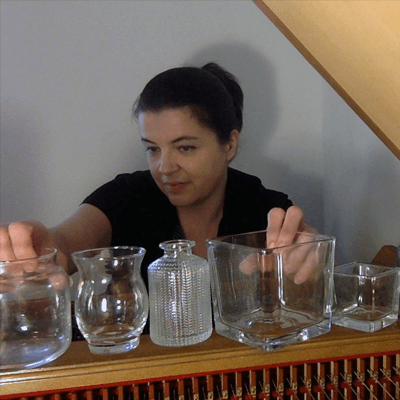 She took part in the 6th International Workshop of Contemporary Music Krakow / Stuttgart (1998), as a scholarship holder of the Muzyka Centrum Association in the “Acanthes” workshops conducted by the Paris IRCAM in Krakow (2000), in the International Multimedia Workshops in Skoki (2000) and in the Polish-German composers’ workshop “4 and 4 more” in Genshagen (2011). Since 2008, she has been a member of the Polish Composers’ Union, and since 2005 also of the Polish Association of Electroacoustic Music (PseME). Her pieces have been performed at many contemporary music festivals, incl. at the “Poznań Music Spring” International Festival of Contemporary Music (1998, 2000, 2012, 2013, 2015, 2018), the “Warsaw Autumn” International Festival of Contemporary Music (2002, 2003, 2005), Musica Polonica Nova in Wrocław (2000), The International Biennale of Art for Children in Poznań (2003, 2005), The International Festival of Electronic and Computer Music “Acousmania” in Bucharest (Romania 2004, 2007), Interactions – Young Art in Poznań (2004), the International Festival “Audio Art” in Krakow (2005, 2006, 2014), Festival Forfest Czech Republic in Kroměříž (Czech Republic 2005 and 2018), 15th Festival de Musica Contempo- ranea Chilena in Santiago de Chile (Chile 2005), Festival de Musica Contemporanea ” Musicahora “in La Serena (Chile, 2005), 37. Synthese in Bourges (France 2007), Tercer Festival Internacional de Musica y Nuevas Technologias” Visiones sonoras “(Mexico 2007), Festival Internacional Acusmatico y Multimedial” Sonoimagenes “in Buenos Aires ( Argentina 2010), International Festival of Women’s Creativity “No Woman No Art” in Poznań (2011), as well as broadcast by radio stations: Program 2 of Polish Radio, Radio Merkury Poznań, Radio Beethoven (Chile), Radio Monalisa (Netherlands). She made her debut at the “Warsaw Autumn” Festival in 2002. The piece Dysotiation for accordion solo, commissioned by the Friends of Warsaw Autumn Foundation with the financial support of Die Ernst von Siemens Musikstiftung, was performed by Boris Lenko. At the concerts of the Youth Circle, an event accompanying the “Warsaw Autumn” Festival, EQ SOUND for flute, quartet, violin and cello (in 2003) and U00 for tape (in 2005) were performed. In 2005, in the Experimental Studio of the Polish Radio, as part of the project “Rej 2005”, the composer staged the piece A Toć była cała sprawa for violin and tape. The premiere of the piece took place on March 28, 2006 in Polish Radio 2, and the violin was performed by Anna Zielińska. The composer’s focus is on electroacoustic and electronic music, searching for new sounds, expanding the possibilities of acoustic instruments with electronics, as well as improvised music, live electronics and various types of combinations of music with video.

In the years 2009-2013, the composer worked on the hypermedia symphonic piece Rhizome, the multi-threaded and heterogeneous structure of hypertext, inspired by e-literature, and the figure of the rhizome. The piece can be explored at rhizome.pl.

Since 2011, Katarzyna Taborowska has been a teacher at the Academy of Music. I. J. Paderewski in Poznań, where she lectures electro-acoustic composition class and others.

Elektroberek for violin and tape (2004)

Through the window for chamber ensemble and tape (2004)

Emfaza for violin and symphony orchestra (2012)

Mural on sunny wall for violin and live electronics (2020)