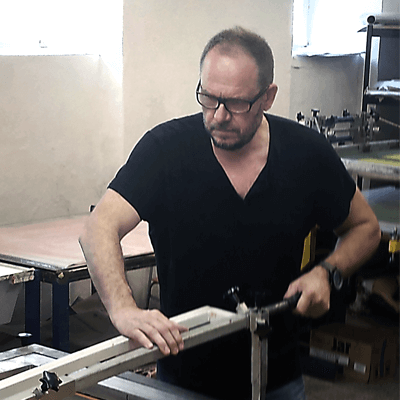 1958. He is a visual artist who has been working in the fine arts since the second half of the 1980s. His work is focused mainly on the field of graphic media, ranging from classical graphics to alternative and experimental printing. In addition, he is engaged in drawing, painting, postage stamps, book illustrations, and creation for architecture (1 work). He creates in wider, mutually open and visually and semantically interconnected cycles, where he applies the principle of seriality, repetition and recycling. It deals with the layering of shaped iconic characters. Using the technique of moving and unstable matrices, it creates a process record – a gradual permutation to atrophy of an individual human character in a unified scheme. His creative program oscillates around the central theme of the depiction of man in the time of loss of identity. Through his artistic reflection, he explores the themes of contemporary unification of life, relativism, manipulation in postmedia society. These are updated but basic social themes of visual art. He examines contemporary expressions and forms of graphics, which he understands as a dynamically developing medium intervening in other types of art. It also deals with means of expression and expressions, which are very diverse in current graphic design and their visual language and image coding is content-powered from sources such as the Internet, print media, advertising, street art, graffiti, design, pop culture.