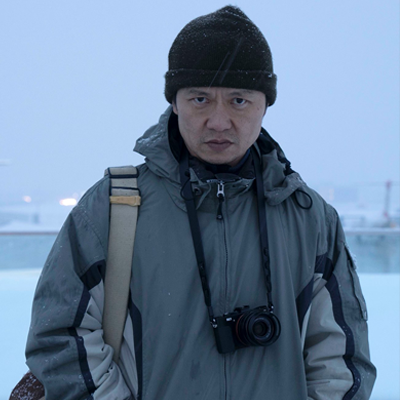 Primarily using photography as his artistic medium, Chien-Chi Chang, (b. 1961) explores alienation and connection between people in contemporary society by developing long-term, interactive relationships with the subjects. In his earlier, well-known series The Chain which was exhibited at the Taiwan Pavilion of the Venice Biennale in 2001 and Bienal de São Paulo in 2002, Chang creates life-sized portraits of patients at Taiwan’s Long Fa Temple psychiatric hospital. His 2001 series I do I do I do exposes subtle societal factors that underpin marriage using a photo album format. In his 2005 series Double Happiness, Chang uses a straight-forward format to document the marriage brokerage process used by Vietnamese brides and Taiwanese grooms.

Starting in 1992 Chang became interested in themes related to the dispersion of individuals or families from their homeland, and in the 19 years hence, followed the lives of illegal immigrants in New York City’s Chinatown who left China as a matter of survival. Entitled China Town and still in progress, the series was exhibited in the artist’s mid-career survey Doubleness at the National Museum of Singapore in 2008, and at the Taiwan Pavilion of the Venice Biennale in 2009. In 2007 Chang traveled with North Korean defectors from Northeast China to Thailand, documenting their lives for his work Escape from North Korea, which won the Canadian AnthropoGraphia Award for Human Rights in 2011. In recent years Chang has expanded his medium to include sound and the moving images, which has enriched his image based narratives with additional, multiple elements. Chang received his bachelor’s degree from Soochow University in 1984, and his master’s from Indiana University in 1990. He began a professional career as a photojournalist in 1991, and has worked for both the Seattle Times and the Baltimore Sun. He joined the world famous photographic cooperative Magnum Photos in 1995.